If you are using Edge web browser, there is a bug that makes you drag the entire game screen while you are drawing. Consider playing in a different browser or downloading a desktop version.

This game was made for the Ludum Dare 45 with the theme Start with nothing. We decided to make an adventure game in which the player builds his adventure from scratch by drawing characters and making choices.

Ever heard of Sketch Quest ?

Haven't heard of it before. But yeah, there are a lot of different games with similar concepts. For example "Draw to life" for Nintendo DS.

I don't know what the artifact was supposed to be, was it some type of sword? I dunno, I just drew a classic Looney Toons bomb

The artifact can be anything you want :) That's the point

Yeah, that's a great idea. We thought about something like that but had no time to implement it, unfortunately :)

for some reason it won't work

Sorry to hear that. Are you getting just a black screen, like eghtzakura? What browser are you using? Have you tried windows version?

I don't have a windows

so, you are trying to play a standalone version? what about browser version then? is it not working too? or are you getting that message in a browser?

Why was most of it just a black screen?

I'm afraid you encountered some kind of bug. It's not supposed to be like that. If you are playing a web version, you could try another browser (for example Firefox).

I really liked this game up until the very end. The art, voice acing, scripting, are all amazing. The story is good as far as a kid's story goes but that ending ruined it for me.

When you're engaged in a story the last thing you want is to be remembered of a different one. References are fine but when the crucial climax of your story is straight up taken from The Lord of the Rings it feels cheap, like the writers got lazy and didn't want to think through how to salvage the situation and resorted to copying from the great writers, It would not have been as bad if it were more subtle but as it stands currently, it ruined the immersion for me.

Still a great game, and I doubt many kids will notice it but that's my one complaint.

It seems like a lot of people got upset with my "references" this time. I'll try to limit myself next time. And yeah, the LoTR trick was my laziness, but we were running out of time, and I had to come up with something, so I decided to go LoTR route. Thanks a lot for the feedback!

I made an account just so I could comment on this. Your game had promise until I heard the names of the towns. At first I assumed Mediah was a coincidence based on ancient Midia, but then came Serendia, and Calpheon. That is blatantly stealing names from Black Desert Online. Go ahead, google those 3 names, and look at your results. Almost only Black Desert Online, huh?

I was excited to play this game with friends over with some alcohol just to laugh our asses off, but this really left a bad taste in my mouth. If you're willing to steal names from another game rather than make up borderline anything adventure sounding on your own, then I doubt you're willing to put too much effort into this.

Yes, the names were taken from Black Desert Online. I was playing a lot of this game before the jam, so I decided to make it as an homage to a game I like. I was hoping that this reference would cause a little laugh in people who play BDO, and I'm sorry if you were offended by that. But saying that no effort was put into a game made in crunch time of 72 hours, just because we "stole" a minor part of it as names of the towns, is a little bit unfair.

Especially when the ending comes and you see they are just taking the climactic moment from The Lord of the Rings. Like, not even a subtle reference, just straight up stolen.

I really like this game. I originally watched Vinesauce Joel's video on it, and, while the video was very funny to me, the only way a stream of a game can be funny is if the game gives them something to work off of. I then played the game myself, and I enjoyed it every step of the way.

However, I do think that this game can be improved. For starters, I think that just the fact that it's only one story is very limiting. Maybe something you could do is have a randomizing story, where after every drawing and the event that would take place, there would be a randomly selected next event. I do understand that would take some time, but I think if you take your time, you can make something really good. Not saying that the current build of the game is good, but parts can be added to increase it's quality.

Thanks a lot for your feedback! Yeah, we understand that the current build doesn't have almost any replayability and there is a lot of ways to improve it. But sadly we only had 72 hours to make this game, and right now there are a lot of other things that we have to deal with. Maybe when we get some spare time, we would come back to this project 🙂

I really enjoyed this game. Please make more endings or more game, or at the very least add an eraser or a clear drawing button in case you mess up I made Shrek the guards in mine 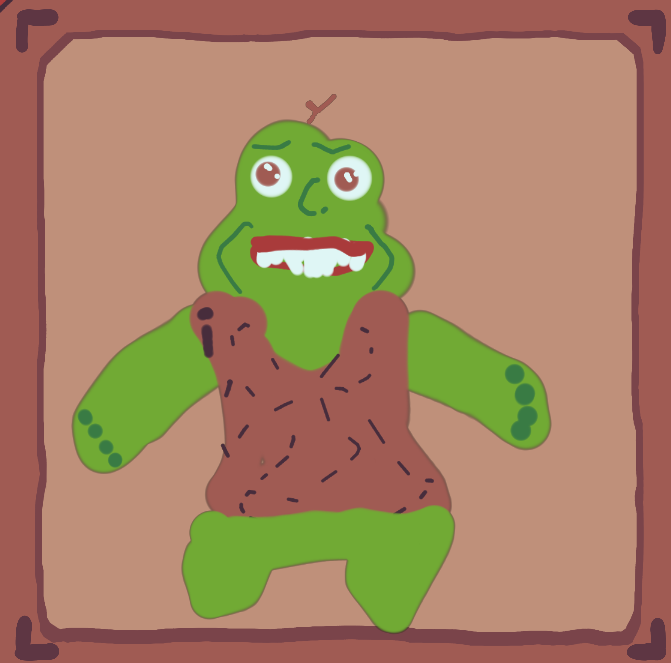 Fun game. I got creative with the drawings.

I made shrek the rogue. I was hoping he would marry shrek.

So did I! haha

It's a cool game. It was awsome

i try moving away  at the princes

Haha 😄 She is a persistent woman.

I decided to do Steven Universe characters. The main character was Steven, the bandit was Connie, the old man was Greg, the princess was Rose Quartz (when they married it was very weird), the guards were pearls, the bandits were Rubies. It was....interesting, to say the least

Yeah, your choices don't really influence the outcome of the encounter, but they change the way the encounter goes, and also change the reaction of the NPC towards you in the future. We wanted to make different endings for different sets of choices but had no time for that.

I decided to do characters from Shrek . I did not expect to and up with Donkey in the end lol

Quite an interesting approach to a kid's story 😄

thats how my brain works

This is really awesome, i had no problems please continue your awesome games they are amazing.

Two Critisis , REALLY needs an Erase Button and SIZE buttons. It captures the feel of drawing like a little kid, Buuuut it does get under the skin when you can't correct a mistake . I wound up restarting the game over and over and over again because I wanted the character to look just right. But I just couldn't get there! PLEASE, correct this in an update. Even kids would want to correct basic mistakes. An Erase feature and Size button Feature are  even in Microsoft Paint.

You can change the size of your brush with a mouse wheel (yeah we should have written more clear control, sorry). And eraser tool... Well, we will try our best, but there are technical problems with making one. It's hard to explain in one message, but basically we are making the cardbord cutouts for the character on the fly, and implementing eraser tool with this in mind would be hard.

Can we play this In windowed mode?? c:

You kinda can by pressing Alt+Enter. Or you can play it right here on a web page without going in fullscreen.

There was a Unity built-in settings window right at the start of a game, but for some reason when we did our build this time it was missing, and we had no time to put it back on.

So sorry, no proper windowed mode.

If it is done with Unity..hold right shift to get the settings screen on starting the game

Nice work, got some twists and twists of twists. Some events seemed silly at first (like offending the princess and she just agrees to marry), but then got justified further on. 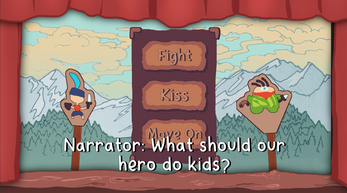 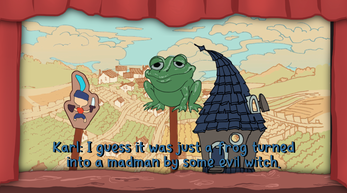 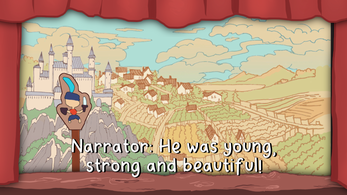